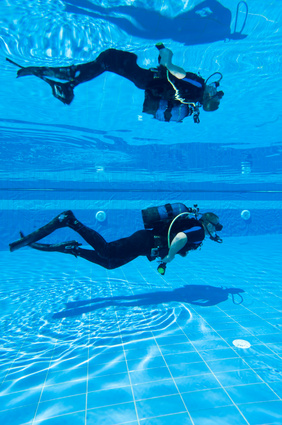 Swimming Like A Fish: How to Master the art of SCUBA Kicks

What’s your go to kick when you’re diving?  Why?  Whenever I ask this question, most people don’t really have an answer as to why they use the kick that they do.

Just as important, many times the kicking technique is less than efficient.  In this article, I want to show you the two most common kicks in scuba diving, when to use each one and demonstrate how to perform each kick efficiently.

These two kicks are go-to kicks used when scuba diving. What many people do not realize is that they have two distinct purposes and should be used accordingly. In the video below I describe the two kicks and when to use each one.

Before going into the kicks themselves, it’s important that you understand some general principles that will make any kick you use underwater more efficient.

The key to an efficient flutter kick is to keep your feet relatively straight, your toes pointed, your ankles loose and let the power come from your hips. You can see in the video below how I demonstrate this kick.

The frog kick is the more efficient of the two kicks presented here. It’s the kick you should be doing most of the time.

The frog kick has a built in resting phase. That is to say, once you kick you get to rest and recover while you are gliding forward. Because of this, you’ll consume less gas while diving using a frog kick. The video below describes and shows how to do an efficient frog kick.

The key to both of these kicks is knowing when to use each one, and to practice them both until you have mastered them.

One huge help in getting your kicks right is to use an underwater camera to see how you look while you are diving. Many people are surprised to see both what their kicking technique looks like, and what their body position is like. Cameras like the GoPro make it relatively inexpensive to see what you look like in the water.

I’m curious to know, what kick are you using most of the time and why? Let me know in the comments below.

Close
Want more SCUBA diving articles like this one? Lets keep in touch!