How Do you Read The Markings On A SCUBA Tank?

Understanding the Markings on Your SCUBA Tank

On most SCUBA tanks the engravings on the shoulder will  indicate the following:

Below is an example of markings you’d find engraved on a Luxfer aluminum 80 and next to it an explanation of what the markings mean. 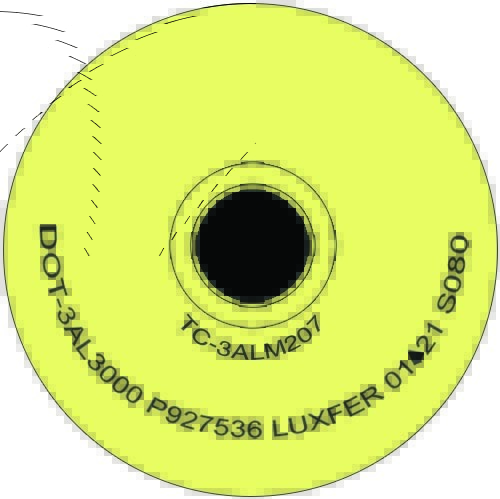 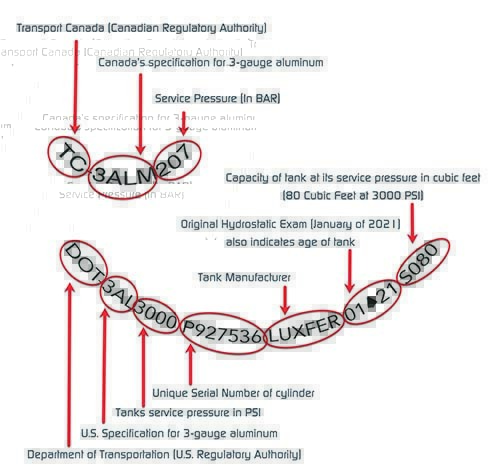 There are many different possible engravings a cylinder can have depending on the manufacturer's it’s specifications and what part of the world the tank was produced. Because of this, the following chart contains common engravings found on different SCUBA cylinders and what the engravings mean.

The above list doesn’t show every possible marking. Also, things like model numbers, dates, serial numbers, etc. will vary from tank to tank. In the list above those markings are shown as examples since the actual marking will change with every tank.

Also, it's important to know that even though the model number will often indicate the cylinder capacity, you should still look up the manufacturer specs when it comes to this. As an example, a Luxfer S080 is typically marketed and referred to as an 80 cubic foot. This number, however, is rounded up. The cylinder actually contains 77.4 cubic feet. You can see the specifications for the most common tanks here.

Another common engraving found on SCUBA cylinders is the hydrostatic test date. Many people simply refer to this as the hydro date. The original hydrostatic exam is usually found on the shoulder of the tank together with the other manufacturer engravings and tells you when the cylinder was originally manufactured. SCUBA tanks need to be hydrostatically tested every 5 years. Subsequent stamps are usually somewhere in the shoulder area, but you may need to look around. I've seen stamps in pretty much every location you can think of on a SCUBA cylinder. 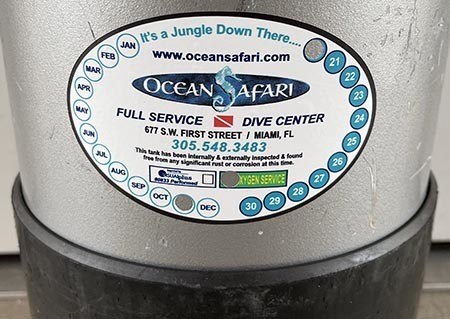 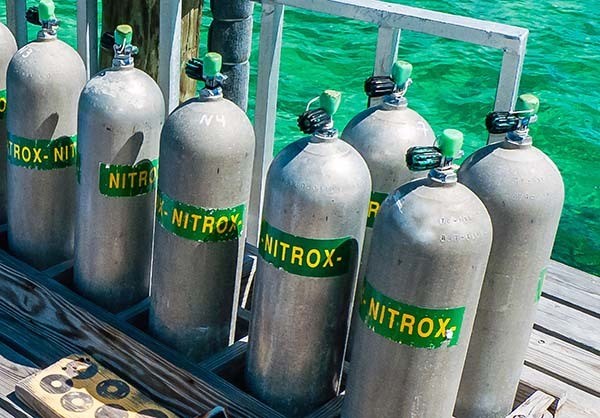 It's very common to see tanks designated for use with Nitrox. This is usually done with a sticker rather than an engraving. Nitrox tanks are labeled for two reasons. First, so that everyone knows that the tank contains a gas other than air. This way no one will accidentally dive with a tank that they do not know the contents of. Nitrox requires the use of different decompression tables than air and the added oxygen also presents different risks that divers need to be aware of. Second, because Nitrox tanks are often filled with pure oxygen and then topped off with air as part of a partial pressure fill, the tanks need to be cleaned for oxygen. Technically, it's the visual inspection sticker that tells the technician filling the tank that it's clean, but the big Nitrox sticker is also helpful.

Any SCUBA cylinder can be adapted for diving with Nitrox. Most new SCUBA tanks come ready to be filled with Nitrox from the factory. However, if you are purchasing a used cylinder, you may need to have your local dive shop clean the tank and for use with Nitrox along with changing the O-rings to Viton O-rings so that they are compatible with Nitrox. Once this process is completed, the dive shop will indicate that it is safe for Nitrox on the visual inspection sticker. Additionally, many shops will place a Nitrox sticker on the tank to indicate that the cylinder may contain a gas other than air.

Choosing a cylinder that’s right for you involves looking at many factors. Among those factors are:

These are all factors that go into deciding what SCUBA tank will be best for you. We have an article that goes in-depth into this topic here.

US Department of Transportation