You're on a relaxing dive enjoying the beauty of the underwater world. You’ve left all your frustration and responsibilities above the surface. After all, this is where you come to “get away from it all,” right?? 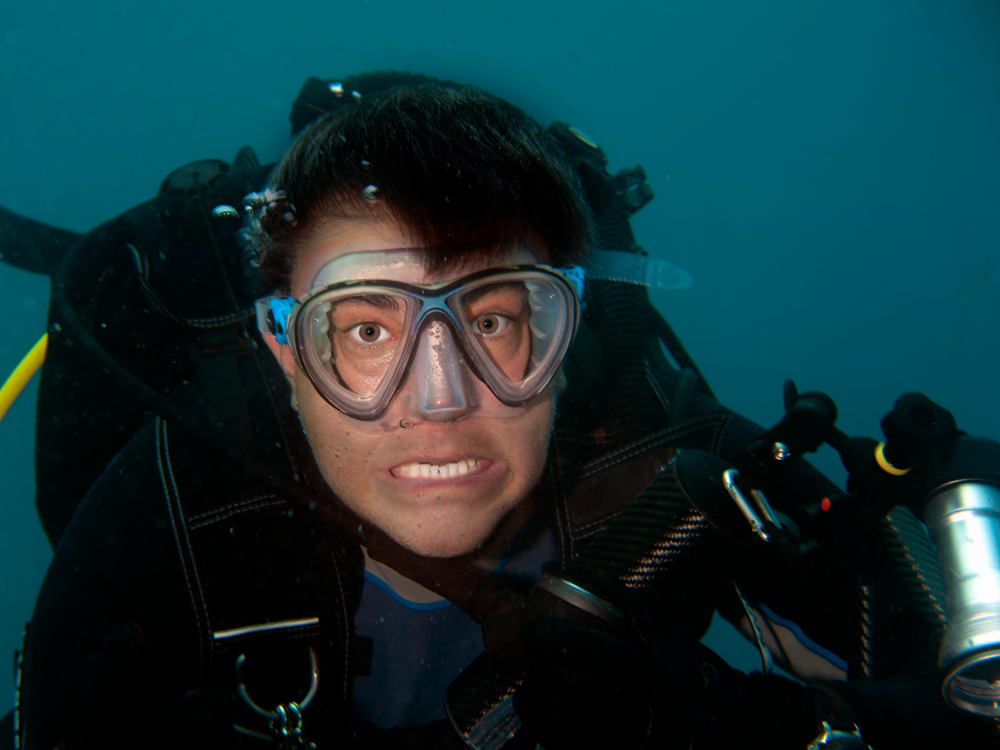 All of the sudden, you notice that another diver is swimming over to you wide-eyed and in a hurry. They give you the “out of air” hand signal just as they take their regulator out of their mouth.

This is where all your training and the choices you’ve made about how you configure your gear come into play.

How will you deal with this scenario? Is the way you’ll handle it optimal? Can you go through the motions in your mind’s eye right now and feel confident you are ready to handle an exasperated out-of-air diver?

When it comes to sharing air, there are many different configurations that divers use.

If you’ve ever wondered why different divers configure their primary regulator and their octopus different ways, and what the pros and cons are of each configuration, you’re going to want to read on because in this article we are going to touch on exactly that!

Disclaimer: Before beginning our discussion on air sharing techniques and configurations, it’s important to note that air sharing, especially in an emergency, is a skill that must be mastered in confined water under the supervision of a qualified SCUBA instructor. Do NOT SWITCH YOUR CURRENT CONFIGURATION without proper training and coaching from a qualified SCUBA instructor!

The origins of air sharing

When SCUBA diving was still new and considered by some to be an “extreme” sport, the gear that was used wasn’t nearly as advanced as it is today.

Early SCUBA rigs only had one primary regulator to breathe from. If your buddy ran out of air underwater, the only option was to share your only regulator by passing it back and forth between you and your buddy. Essentially, you’d take turns taking breaths from a single regulator. 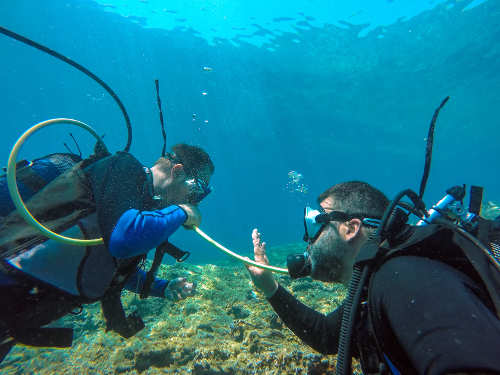 With the ability to have 2 divers breathing from the same tank come many questions about how to best configure your gear. The first question being….

Which regulator should you give a diver in distress?

Before we can address the issue of how to configure your regulators, we need to discuss the major philosophical difference in opinion that many SCUBA instructors have. 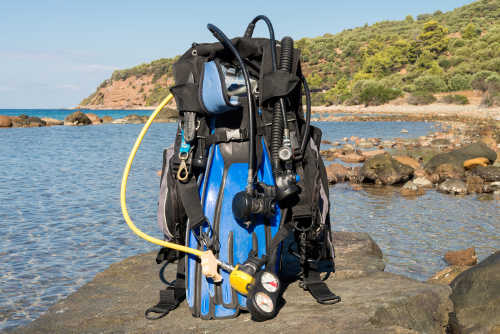 You see, some instructors believe that an out-of-air diver should always receive the regulator which the diver that’s doing the rescue is breathing from, also called the primary regulator.

Others believe the out-of-air diver should receive the octopus.

While there is not “right” answer here, let’s take a look at some of the pros and cons of each method.

Some of the pros of donating the primary regulator (the regulator the diver is breathing from) include:

The cons of donating the primary regulator in a buddy-breathing scenario include:

Diving with an octopus to give out as the alternate air source is probably the most common configuration.

The pros of giving out the octopus to an out-of-air buddy include:

The cons of giving out the octopus to out-of-air buddy include:

Now that we understand some of the pros and cons of using an octopus for an out-of-air diver vs. giving them the regulator you are already breathing from, let’s look at some of the different configurations.

The placement of the octopus holder should be somewhere in the “safety triangle”. This is an imaginary triangle that goes from your chin to your waist in front where the octopus can be easily accessed by both the diver and their buddy.

Having the Octopus on a holder

There are many different types of octo holders on the market. Each design has their benefits and drawbacks. The basic premise behind all octo-holders is the same. 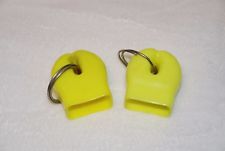 They must hold the octopus securely throughout the dive so that the regulator does not accidentally become dislodged and begin to dangle. They must also simultaneously be easy to deploy and come lose if it is needed for an emergency. (IMAGE of Octo holder)

Because of this dichotomy, many octo-holders fail and end up having a diver dangle their octo behind them damaging both the regulator and the reef. 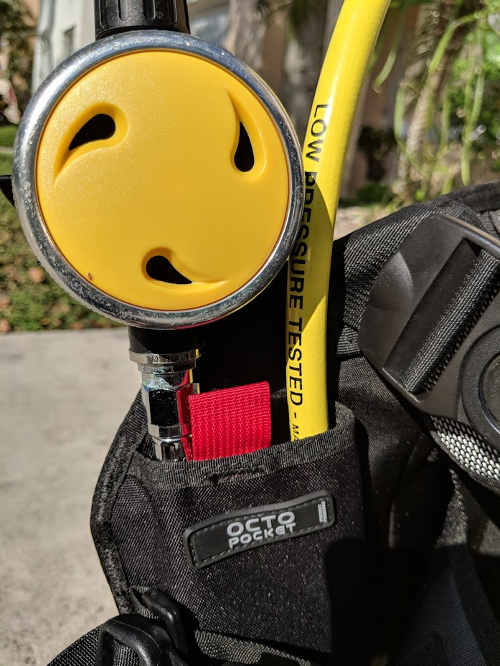 Some BCD manufactures have taken note of the issue of keeping the octopus nice and tidy while still making it easy to deploy in case of emergency.

To help solve the octopus dilemma, they’ve designed their BCD’s to hold the octopus for you.

Using a D-ring as an octo holder

Yet another creative way to solve the octopus dilemma is to curl it into the D-ring of a BCD.

While this solution is less likely to result in the regulator becoming loose and dangling behind the diver, it does take a bit of getting used to.

Also, it may seem awkward to have the curled-up hose dangling below the D-ring where the octopus is stowed.

Configurations where the primary air source is donated

One of the most common configurations where the primary air source is placed on a longer hose and donated is when a diver is using an Air2 or similar inflator / regulator combo.

There are several low-pressure inflator / regulator combos on the market, but the SCUBA Pro Air 2 was one of the first systems that gained widespread use. 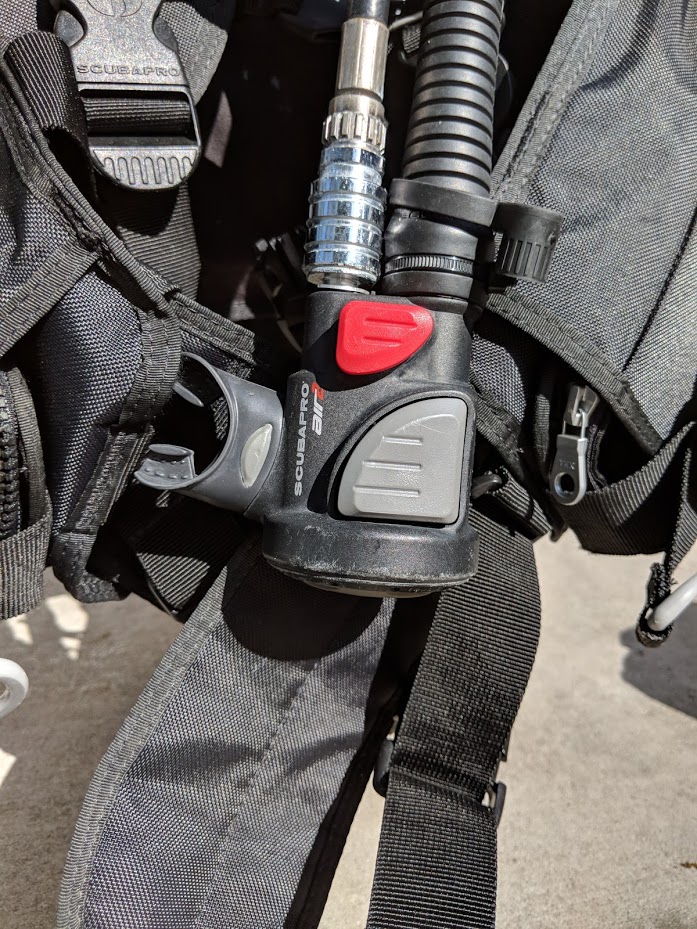 By combining the low-pressure inflator and the alternate air source into one, the diver effectively eliminates one hose from their SCUBA rig.

You also eliminate the possibility of having the octopus dangle because the hose used for the low-pressure inflator is typically much shorter than that of an octopus.

As mentioned before, the downside is that it requires the diver to be more involved in an out-of-air scenario because the must give out their primary regulator.

Because the hose on the Air2 is short, it makes it very awkward and less than ideal to be donated to another diver for air sharing.

The final configuration worth mentioning is one that was born in cave / technical diving but has been adopted by many recreational divers.

It is known as the Hogarthian rig named after Bill Hogarth Main. 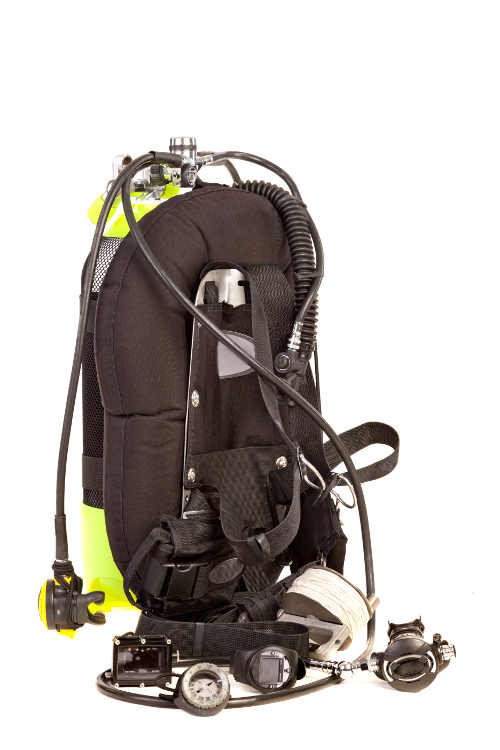 The rig consists of the primary regulator being a longer hose (up to 7 ft) curled around the diver’s body. The octopus is worn on a necklace right under the diver’s neck.

In this configuration the octopus never comes off the necklace. In an emergency, the diver donates the longer hose and then switches to the octo.

Some advantages to this system include:

Below is a Video where we discuss Air Sharing in Different SCUBA Configurations:

What configuration do you use and why? let us know in the comments below.